Carrie Does Poems
Holes and Vettes

Hi! This year (2022), I've decided to share a poem on my blog and podcast and read it aloud. It's all a part of my quest to be brave and apparently the things that I'm scared about still include:

Thanks for being here with me and cheering me on, and I hope that you can become braver this year, too!

Holes and Vettes Bar Harbor. Maine. 2022. A baseball field. Corvettes line up in rows, engines still For once and owners preening From their folding chairs, legs poking Into the same grass that supports Life Flight helicopters in emergencies And soccer cleats. This earth withstands so much. It’s a yearly gathering that’s paused two years Thanks to global disease, but now the drivers Are all maskless and showing off Their cars to locals who wander Between the lines, marveling. “I will never be rich enough To own one,” says a man in a black t-shirt to a guy with a firebird red model. “I thought that too,” The guy says. “Work hard. You’ll get there.” The first man moves to run A finger across the car’s hood. The owner flinches like it’s some kind of assault. “Try hard,” he repeats. “You’ll get there." We all try hard To get there, Inventing monologues Of worth based on materialism, Who owns what, how shiny Our skins are, our hair, our cars, Houses. We pretend like any of this Fills up the holes we dig inside ourselves, Inside the ozone, inside the earth. Darkening faces, Double visions. Horror. The Vettes represent adventure And freedom. Not being beholden Despite the car loans required, The interest rates. The American Debt. “There are eight Generations of car here,” Says an organizer With a yellow sunhat Perched on her head. “This is the car of dreams.” American Dreams. And that’s the thing. Have you ever hit your head On a poem or a wall Or something else hard And realized that your dreams Aren’t actually yours? Have you ever felt like you’re falling Though you are standing still on a field Surrounded by excess and shiny paint Jobs and pride, merciless, assaulting, And begged for stable ground Before realizing you’re just making holes, too. Maybe the holes are in a ball field, Or in the Earth or the ozone Or maybe—just maybe—in your own damn heart.

Hey, thanks for listening to Carrie Does Poems. These podcasts and more writing tips are at Carrie’s website, carriejonesbooks.blog. There’s also a donation button there. Even a dollar inspires a happy dance in Carrie, so thank you for your support.

The music you hear is made available through the creative commons and it’s a bit of a shortened track from the fantastic Eric Van der Westen and the track is called "A Feather" and off the album The Crown Lobster Trilogy.

While Carrie only posts poems weekly here, she has them (in written form) almost every other weekday over on Medium. You should check it out! To My Trolls, Coming Into My World

One of my grandmothers painted and wrote poems when she wasn't busy raising her three children. This is one of her poems. Grammy Barnard... 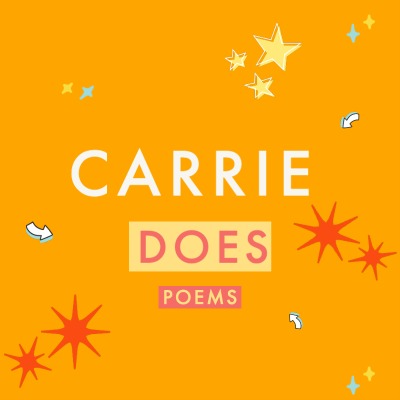 These firefighters show up at a hotel fire, maybe Started in the laundry room during the off season, hoses Frozen from winter temperatures, ice...